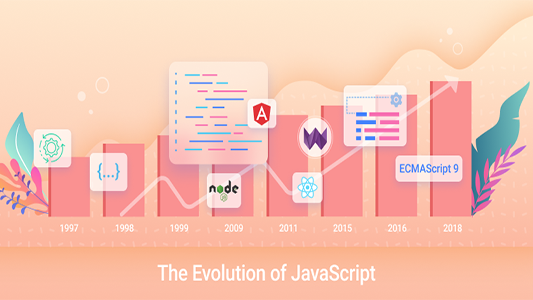 JavaScript is one of the most popular programming languages today. It has survived a long way of changes and updates to the point we know it today. Let’s have a look at the most important milestones in its development.

Java Script was created in just 10 days. It was first known as Mocha, then as LiveScript, and eventually as JavaScript. Its name resemblance to the Java programming language led to the new language’s initial success.

JavaScript 1.0 was well received by users; thus, Netscape chose to include version 1.1 in Netscape Navigator 3.0. In its turn, Microsoft published Internet Explorer 3.0 and a new JavaScript version. They dubbed it Jscript to avoid any potential license concerns with Netscape. Overall, three JavaScript versions were released:

Let’s travel back in time a little. Initially, there were no standards for programming languages. However, the growing use of computers from multiple manufacturers revealed the necessity for consistency in operating approaches such as programming and input and output codes. Data developed on one manufacturer’s computer might be utilized on another manufacturer’s computer with very minor modifications. It would also cut down on redundancy in the development of new programming languages. That is why, on April 27, 1960, a manufacturer’s association known as the European Computer Manufacturers Association, or ECMA, was formed in Brussels. A committee was created to develop the association’s foundation as well as write rules and standards.

As for the JavaScript language, in 1997, it was modified to meet the criteria of ECMA. There are two main JS standards:

JavaScript refers to the programming language, while ECMAScript reveals the versions and updates of the language.

The evolution of the JS language cannot be separated from the development of various frameworks and libraries. A new JS framework or library appears on a regular basis. We will recall the first and most significant ones. Frameworks and libraries contain ready-made components and elements that developers can use in creating apps. It significantly facilitates and speeds up the process of building applications. Besides, the most well-known frameworks have wide communities of developers, which provides newcomers with an opportunity to learn fast and to benefit from their peers’ experience.

JavaScript has undergone a serious process of evolution. Today, it is a widely used language for creating web applications and websites of any complexity that are interactive and user-friendly. It is on the list of required skills for developers’ positions in any IT company. So, if you’re still undecided about what to learn first, JavaScript will undoubtedly come in handy.