Started from Android VPN, Turbo VPN has come a long way in the virtual private network industry. Now it is one of the top downloaded VPN apps in the Google Play Store. Known as “Free Unlimited Data VPN,” the number of downloads has already surpassed 100 million. Besides, Turbo VPN has released a PC version for Windows and macOS.

Like the Android app, the Turbo VPN PC version works similarly with the easy-to-use user-friendly interface. Nowadays, staying anonymity is essential, especially if you involve in high profile activities. At that moment, having a free VPN comes in handy. With one click, Turbo VPN will encrypt your traffic data and hide your IP from the hacker.

The security of the public computer is risky. If you have to work in an outdoor PC network, then Turbo VPN for the PC version will help you to stay anonymous and secure your network connection. 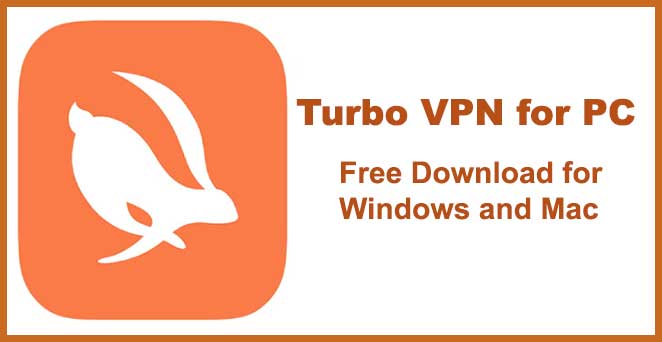 Previously, Turbo VPN has only an Android app, but now it has announced various PC versions such as Windows and Mac. Also, it supports Windows 7/8/10. To download Turbo VPN, follow the below instructions.

Then this site will redirect you to the download options for the PC version. From the alternatives, choose your PC version. If you use Mac desktop, then click on “macOS,” and for Windows computer, click on the “Windows” option.

After choosing the operating system, Turbo VPN software will start downloading on your computer.

If you click on Windows OS, then you will get a small “.exe” file on your computer. Check the data in the “Download” folder. However, if you choose macOS, then you will be redirected to the Mac App Store to download it.

How to Install Turbo VPN for PC?

Installing Turbo VPN on your PC is super easy. Now follow these steps to install this VPN.

All downloaded software and files store in the download folder on your computer. Now go to the download folder and search TurboVPN .exe set up file. If you locate the file, then double click to open it. Now click the “Install” button, then the terms and conditions page will appear. Read the TOS and click the “Agree” button. Within a few moments, the software will be installed in your PC along with a desktop icon. Now click the “Finish” button to complete and open the VPN PC version. The Turbo VPN is ready to use.

How to Use Turbo VPN for PC?

After installing Turbo VPN software, you will see an icon on the desktop. Click on the Turbo VPN icon to open and again click to connect. It will connect to any listed proxy server. After joining, the dashboard will show which country’s server the VPN has connected. In the free version, there are several proxy servers. You can choose any of them. However, the premium version supports a lot of high-speed servers. Depending on your internet speed, it may take half a minute to several minutes to connect. After connecting, you can minimize the Turbo VPN dashboard and start unblocking content as well as browsing anonymously.

Unblocking website is the first feature of any VPN. If you cannot open any site in your country, then Turbo VPN will help you to unblock them.

Tracking IP addresses and stealing personal information is big business. However, when you open Turbo VPN, all your internet traffic will be encrypted. Also, it will hide your IP address from a hacker.

Accessing favourite content could be tough if you are travelling. However, with Turbo VPN, you can watch videos from anywhere.

Protecting a network connection is the highest priority if you are surfing online and doing financial transactions. Turbo VPN will secure your public or home network to process the risk-free purchase.

Turbo VPN works smoothly on any operating system. With more than 50 locations and 10000 servers, it provides the highest possible security and anonymity. Download Turbo VPN free for PC and enjoy secure browsing.